For millions of people across the world, kicking back in a beer garden on a sunny day with an ice cold beverage in hand represents one of life’s simplest – and greatest – pleasures. Offering the chance to drink, socialise and unwind in an outdoor setting, it’s no wonder that beer gardens take little time to fill up as soon as the weather takes a turn for the better. 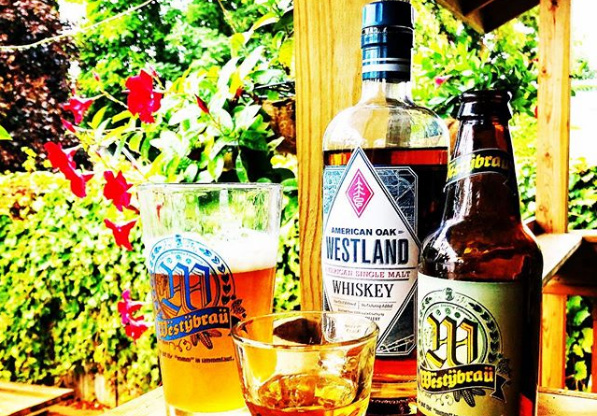 New York State may be best known for the vibrant metropolis of New York City, but venture beyond the Big Apple and you’ll find plenty of other towns and cities worth a visit. Many of them have their fair share of watering holes too, and with warm and sunny weather from May to October there’s plenty of time to make the most of its beer gardens. Here are 12 of the best.

This delightful neighbourhood pub and sandwich shop simply oozes character and charm, and has become a much loved member of Forest Hills’s social landscape having served patrons for over three decades. A spacious bi-level dining space is complemented by a vast 3,500 square foot beer garden boasting long, communal picnic-style tables, umbrellas, seasonal flowers, and a large bar, allowing guests to order refreshments without venturing back inside. Perhaps the venue’s centrepiece attraction is the artfully designed, mosaic “waterfall” fed by beer taps that keep cool water flowing throughout the day. A selection of 18 artisanal beers and a dozen cocktails will satisfy even the pickiest of drinkers, while time-honoured foodie favourites such as burgers, wings & other hearty comfort dishes are among the culinary offerings. 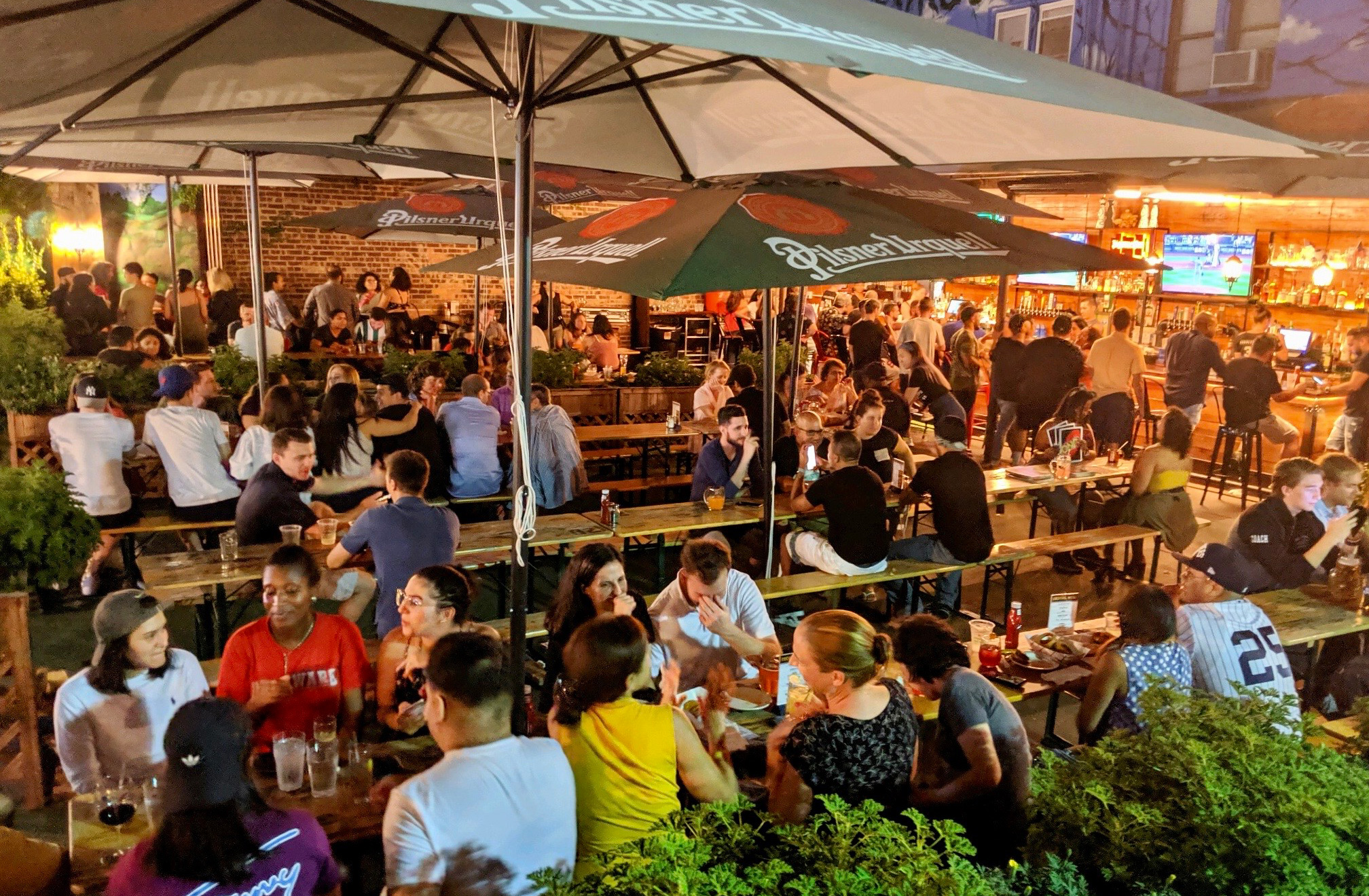 One of the more recent additions to Suffolk County’s impressive line-up of drinks venues is Hops Scotch Bottle Shop, which opened its doors in 2019 after years of planning. A unique beer store that also doubles as an educational workshop space and café, the establishment stocks some 75 assortments of bottles and cans from a variety of breweries, all of which can either be purchased and taken home or enjoyed in store. Outside, a delightful beer garden offers an additional 10 beers on tap that rotate on a weekly basis, along with several small or larger dishes, including pizza, lamb chops, and even a make-your-own cheese board. Sweet-toothed patrons will be keen to sample one of the venue’s whipped cream topped beers, available either as a dark stout topped with chocolate whip cream and chocolate wafer, or a seasonal spiced ale or winter ale with peppermint whipped cream, nutmeg and candy cane. Back inside, striking wall art created by talented local residents add to the appeal. 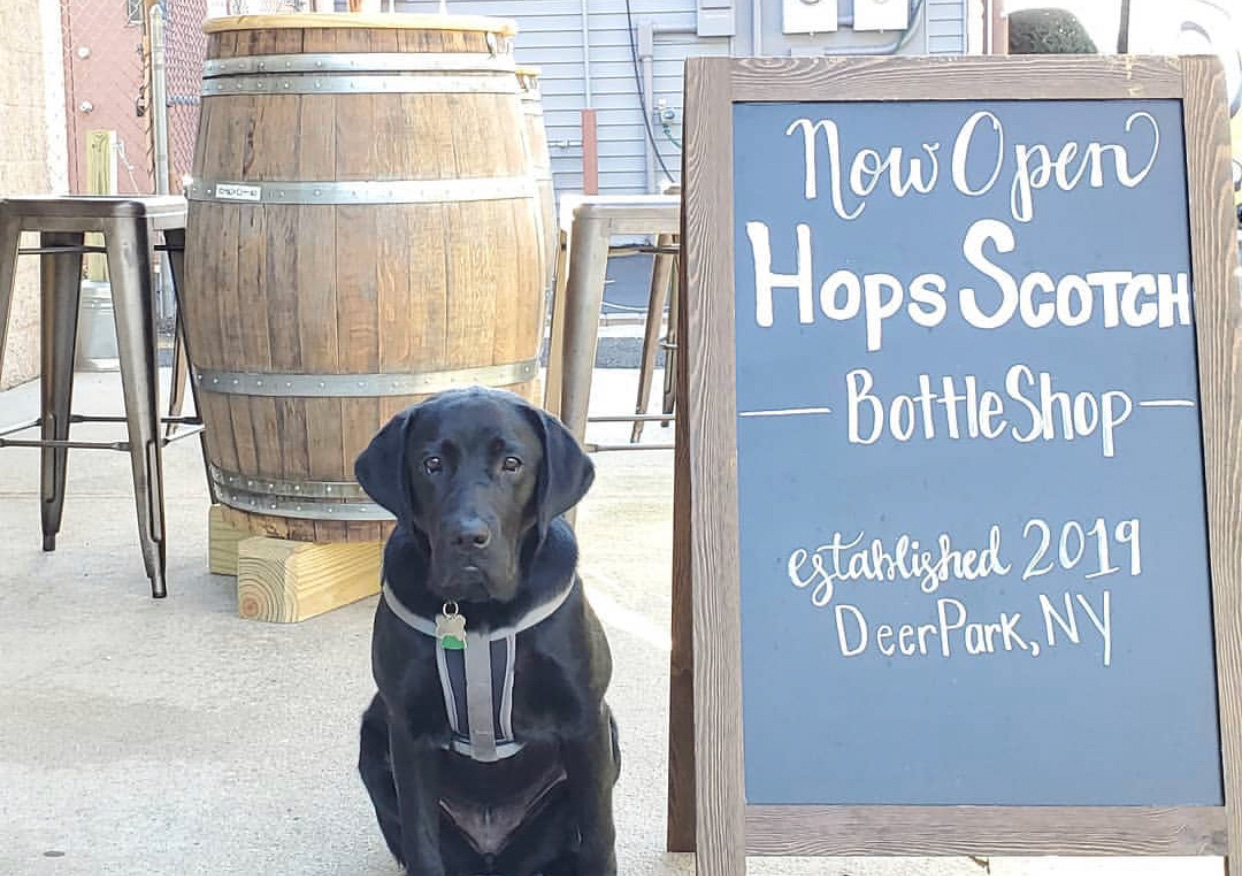 Situated in the city of Ithaca – not to be confused with the Greek island of the same name – on Cayuga Lake in New York’s Finger Lakes region, The Westy is a brick-lined watering hole that’s been part of the West End district’s vibrant renaissance of recent years. A much cherished meeting point for the local community since opening its doors a decade ago, central to the brick-lined bar’s popularity is its vast beer garden, where the venue’s wide selection of craft beers, spirits and cocktails can be enjoyed in the open air. 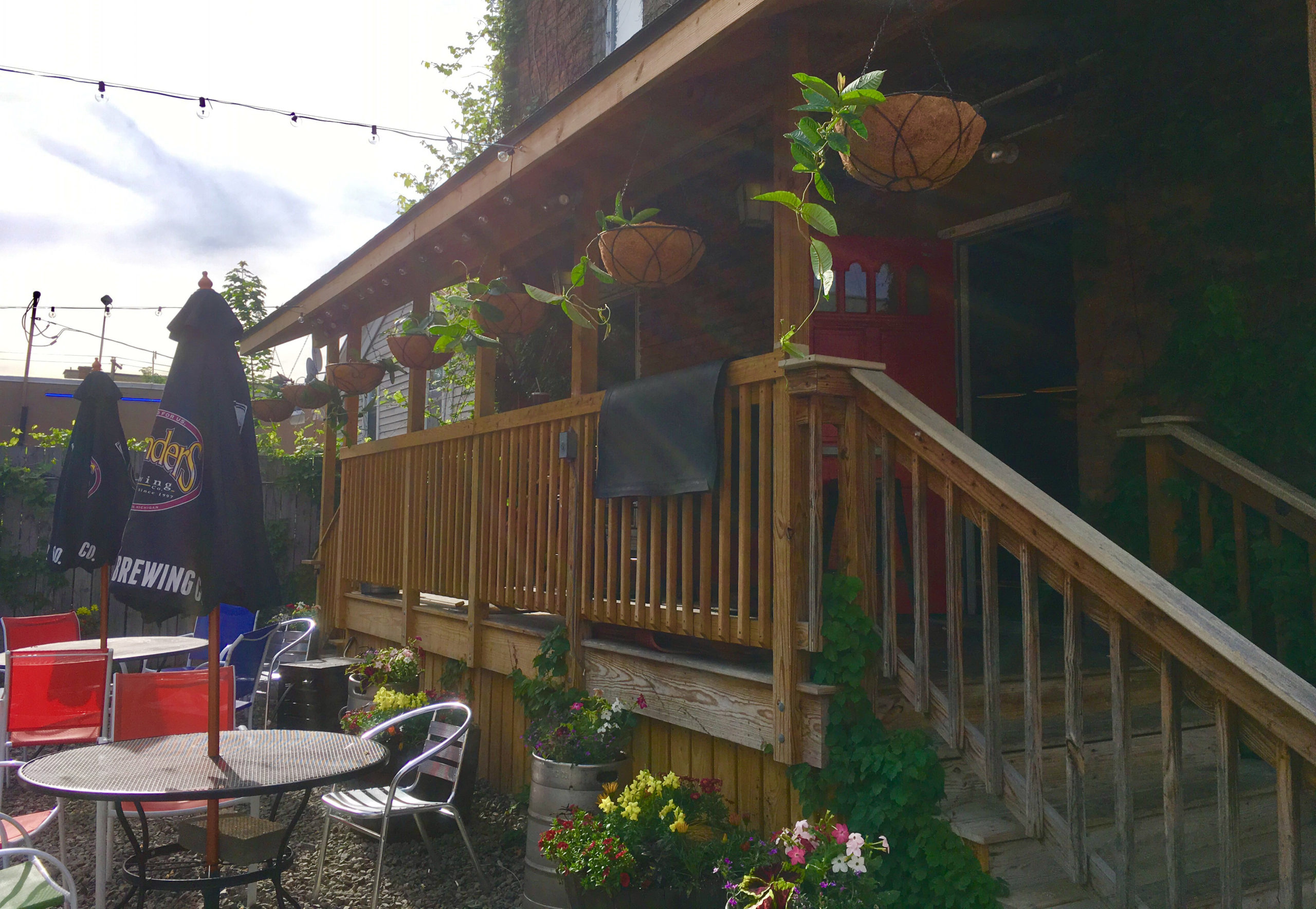 Established in 1996, Ellicottville Brewing Co. is an authentic craft brewery with three brewpubs dotted around the heart of New York ski country. Among them is Ellicottville Brewing on Chautauqua in Bremus Point, which enjoys a scenic lakeside setting that’s famous for its captivating “Double Sunset”, which occurs when the Sun sets on Bemus Bay and then continues to set on Lake Erie 35 miles away, with these sunsets lasting for up to an hour. As for the venue itself, the delightful outdoor patio seating area provides ample space for soaking up the views while enjoying the 16 tap lines including locally crafted brews, as well as a wide selection of local wines. 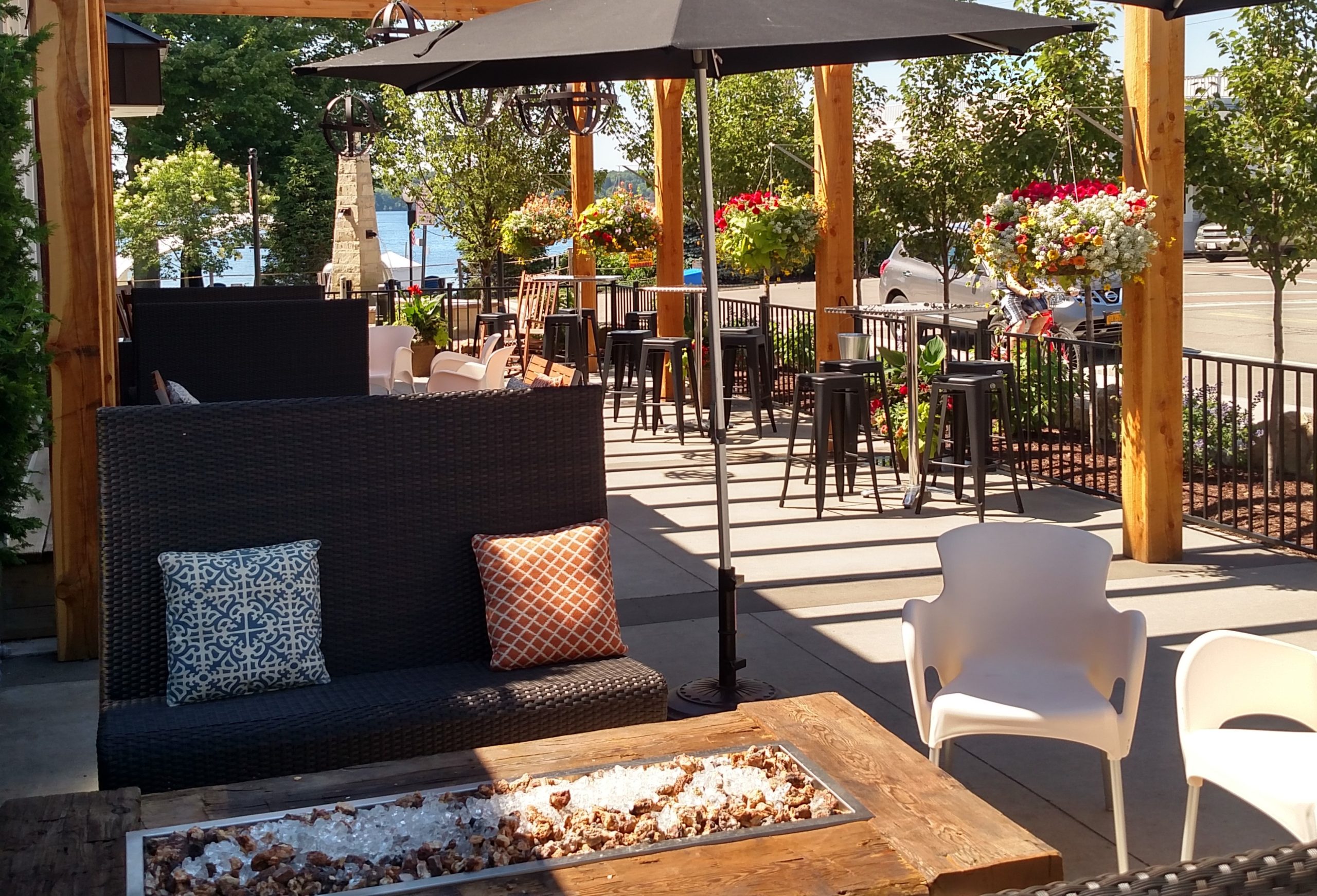 Complimentary pizza and a mechanical bull ride are two of the major draws of this popular beer hall in downtown Albany. Housed within a stunning historical building, the venue features some of the very best craft beverages you’ll find in New York State, with some 18 rotating beer/cider taps along with an extensive can & bottle list on offer – all of which can be enjoyed on the huge outdoor patio that’s tailor made for a sunny brunch or late night cocktail. On Friday and Saturday nights the second level turns into a dance floor with a live DJ & drink specials, and there are also regular special events including beer pairing dinners. An ever increasing number of breweries dot the landscape around The Finger Lakes region in Central New York, all serving up innovative and delicious craft beers. At the vanguard of this burgeoning scene is the Boathouse Beer Garden, which attracts locals and visitors alike with its locally crafted beers (including its own line of in-house brews), eye-catching views of Cayuga Lake from the large outdoor drinking area, and – perhaps its quirkiest attraction – the Finger Lakes Boat Museum, which is housed in the establishment. Visitors can also enjoy live music and fun events every Friday and Saturday all year long.

Open all year long, the ample beer garden at this unpretentious drinking spot in the Bayside neighbourhood of Queens features a circular outdoor bar complete with large illuminated umbrella as well as the option to become fully enclosed during colder months. Conveniently located by one of the entrances to the (LIRR) Long Island Railroad Bayside stop, customers can pick from a diverse selection of wines, beers, cocktails and signature drinks, and a hearty Sunday brunch draws hungry patrons on weekends. Inside, the venue’s walls are adorned with old pictures of the bar in its former life as well as of Bayside down the years. An authentic German Biergarten, Wolff’s has four locations across Upstate New York, each offering Bavarian food, beers & weekend brunch served at indoor picnic tables, plus live soccer from around the world. The original venue is in downtown Albany, which has previously been voted among the best bars in America thanks to its top class German, Belgian and Czech biers, quality sausages and schnitzel served with homemade spätzle, and screenings of all your favourite soccer games. The well-sized garden area provides respite during particularly crowded times, with plenty of seating and perching zones available.

A veritable oasis in Bayside, Central Queens, Cooper Beer Garden is a quintessential neighbourhood watering hole where a loyal band of patrons while away the hours through the balmy summer months, making the most of the idyllic outdoor beer garden. Cold draft beers and freshly cooked food arrive steadily from the bar and kitchen area, while a Friday DJ night, live music on Saturdays and a regular programme of family-friendly Sunday events provide additional entertainment.