The rolling hills and historic treasures of the Hudson Valley provide a scenic backdrop to a busy calendar of annual events, with the winter months a particularly prolific period for shows, tours and exhibitions.

Stretching along the Hudson River from Westchester County to Albany, the picturesque rural surroundings of the Hudson Valley draw large numbers of visitors keen to escape city life. But more than just natural beauty, the region also has a buzzing cultural scene, with a huge number of events taking place here throughout the year. Here are 10 to make note of this winter.

The theme of eyes preoccupied the late French-American artist and sculptor Louise Bourgeois for many decades, believing them to be a deep metaphor for the truth. This striking, large-scale sculpture, featuring four eyes that stare out from an undulating bronze cloud with pupils illuminated at night, is designed to emphasise the human gaze, and the desire to both look at and be looked at by others.

Held in the year of Boscobel 60th anniversary, this exhibition of lenticular photographs and archival materials is on display in the historic house’s gallery through at least early winter. The walls are lined with these photos that change from “before” to “after” images, from when the house was being demolished in the 1950s to 2021, in fully restored glory. Archival materials include the original guestbook from opening day, original archival photos, and some brochures from decades past. Guests can visit the gallery with Gardens and Grounds Admission tickets. from Fridays to Mondays, 9am until sunset.

The Wonderland of Lights

(Photo: The Wonderland of Lights-Rhinebeck)

This winter the town of Rhinebeck will play host to its inaugural Wonderland of Lights extravaganza, featuring dozens of dazzling displays guaranteed to captivate the entire family. Created as a magical drive-thru experience, visitors will get to enjoy a plethora of festive pageantry, from tunnel displays to towering structures and whimsical designs, as they journey through more than a mile of spectacular lights and holiday wonder.

American Impressions: A Nation in Prints

Comprising around fifty prints, rare books, and photographs, this exhibition seeks to trace the amorphous evolution of symbolic representations of the United States expressed in the history of American printmaking from the colonial era to the present day. It is divided into four thematic sections, each organised chronologically as a series of visual discourses that consider multiple, often contradictory narratives, revealing the complex identity of America as a nation.

This exhibition presents over 40 paintings and sculptures by numerous African American artists who came to prominence during the period bracketed by the Harlem Renaissance and the Civil Rights movement. These diverse works, all created at significant social and political moments in American history, range in style from modern abstraction to stained colour to the postmodern assemblage of found objects.

Some of the most gifted artisans in the Hudson Valley will descend on Samascott’s Garden Market, a charming family-owned garden centre in the town of  Kinderhook, in early December for a one-day indoor craft fair. Taking place in the venue’s gorgeous greenhouse, the free-to-enter fair will see a huge array of artisanal goods on display including wooden toys, ceramics, paintings, jewellery, and more festive offerings, making for a perfect gift-buying opportunity ahead of Christmas.

The second in a series of exhibitions, How We Live, Part 2 explores the responses from artists to the travails faced by the US and the wider world over the past year and a half. Featuring a selection of two-dimensional works including sculptures, paintings and tapestry, it looks at how the narratives incorporated into artists’ works bespeak universal fears, concerns, and celebrations of who we are as human beings, as Americans, and as part of a global community.

Hosted by scenic design artist Kevin McCurdy, this one-of-a-kind family holiday event has been a regular fixture on the Hudson Valley’s festive calendar for 15 years, offering lights, shows, animated displays, and amazing new attractions across six themed areas. This year’s iteration takes proceedings outdoors for a festive Winter Wonderland Walk. Perfect for families, the magical journey will take you through a Gingerbread Village, past a crew of marvellous misfit toys, and into a brand-new Christmas Canyon for an eye-catching laser show. 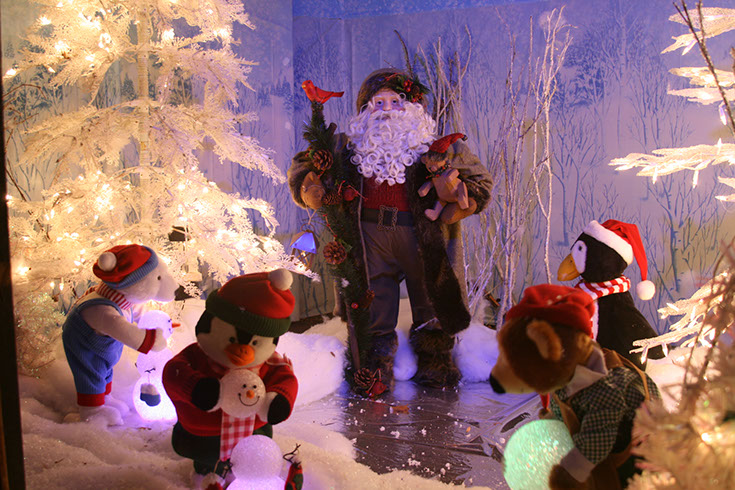 In 1929, after eight years in Europe, photographer Berenice Abbott returned to New York City, where she found herself inspired by its dramatic transformation. Construction was everywhere, while hundreds of 19th-century buildings had been torn down to make way for skyscrapers. Determined to capture this momentous change in photographs, she began shooting the city and by 1940 had completed a collection considered one of the monumental achievements of 20th-century photography. The New York State Museum later acquired a partial set of the series, a selection of which is reproduced in this exhibition.

Jeffrey Gibson, To Feel Myself Beloved on the Earth

Best known for his abstract painting, sculpture and prints which carry an autobiographical cultural inflection, this immersive exhibition showcases a collection of quilts, garments, drums, prints, and video by Choctaw-Cherokee artist Jeffrey Gibson. The colourful, large-scale quilts accompanying the multimedia work feature messages that range from poignant to proud and celebratory, each imbued with the power of political statements around issues of race, sexuality, religion, and gender.