In New York City, dining outdoors has become a preferred pastime as more eateries set up outside seating. Providing small sidewalk cafés with a few tables as well as sprawling spaces stretching the better part of a block, restaurateurs continue to take advantage of every square inch of real estate. If you’re looking to dine al fresco in the Big Apple, these are some of the best NYC restaurants with sidewalk cafés.

A mainstay in the Meatpacking District for almost 15 years, Keith McNally’s Pastis closed in 2014 but made a comeback in 2019. The quintessential bistro whips up yummy classics like escargot, croque-monsieur, and moules-frites, but it’s the restaurant’s Parisian vibe and a reputation for attracting the likes of Lorne Michaels and Dianne Von Furstenberg that draw the city’s trendsetters. At Pastis, relax at a table outside, and revel in a glass of Beaujolais while life downtown passes you by.

Diners love the sweeping views of the Brooklyn Bridge, Williamsburg Bridge, and Brooklyn Skyline at this eatery in the South Street Seaport. Plating modern-American fare, Industry Kitchen specializes in wood-fired pizzas, grilled meats, salads, and plates of pasta served alongside beer, wine, and craft cocktails. The restaurant features plenty of space, even for large groups, so meet up with colleagues for drinks and a casual meal while soaking up the seaport’s maritime atmosphere.

Since 1954, this East Village Ukrainian diner has cooked up pierogies, borscht, and blintzes, becoming a household name in the five boroughs and destination for foodies from around the globe. Although Veselka has expanded its space several times, the restaurant continues to celebrate Eastern Europe’s distinct culinary culture. Dine outside in the eatery’s sidewalk café, set in the heart of one of Manhattan’s most eclectic neighborhoods. 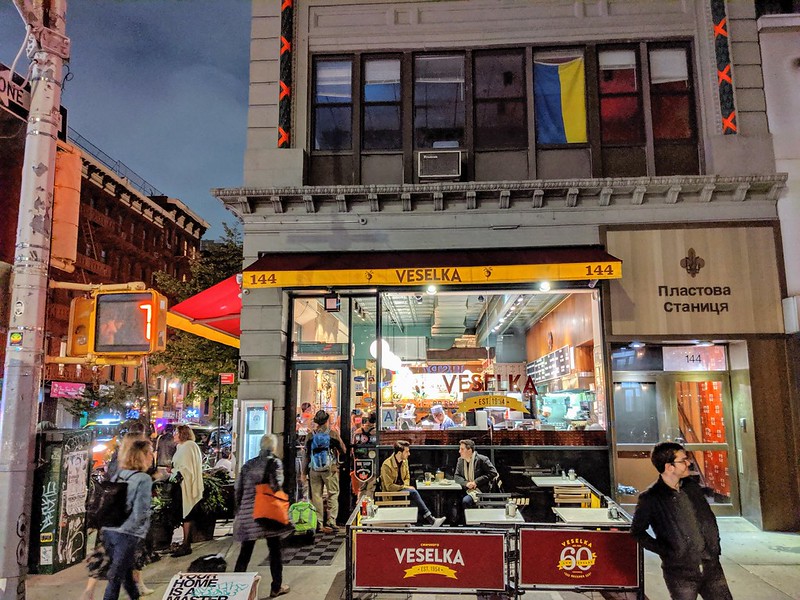 A TriBeCa highlight since 1990, Bubby’s started as a pie company and later evolved into a favorite downtown spot for comfort food. The casual restaurant is best known for its excellent brunch––try the fried chicken and pancakes or avocado toast––but also serves tasty classics like meatloaf, deviled eggs, and matzoh ball soup at dinnertime. Besides priding itself on “made-from-scratch American cooking,” Bubby’s also bakes some of the best pies and buttermilk biscuits in NYC.

Known for its outdoor seating and fresh seafood, Seamore’s in NoLIta is one of the neighborhood’s trendiest eateries. Michael Chernow (also the owner of The Meatball Shop) and his team focus on delivering sustainable seafood through various initiatives, including reducing carbon emissions by sourcing close to home. Beyond Baja fish tacos, oysters, and lobster rolls, Seamore’s prepares tasty veggie sides such as cauliflower mash and garlic broccoli.

If stracciatella with kale and ramps, and tomato fennel sausage with butter beans and parsley salad sound tempting, head to this Greenpoint restaurant. Promising a taste of Montreal in Brooklyn but with international flavor, Chez Ma Tante is another solid choice for brunch and rumored to whip up the best pancakes in town. Other delectables––like chips and aioli and pigs head terrine–-were designed to be shared, and rank highly as well. Sidewalk seating adds to the European feel.

A French staple near Lincoln Center for the Performing Arts, this Daniel Boulud eatery draws pre and post-performance crowds, especially during warm-weather months when the front patio is in full swing. Locals and tourists adore Bar Boulud’s outdoor space on Broadway, as they people-watch while savoring dishes like chilled corn velouté, tuna crudo, and steak frites, all inspired by the chef’s upbringing in the countryside near Lyon, France.